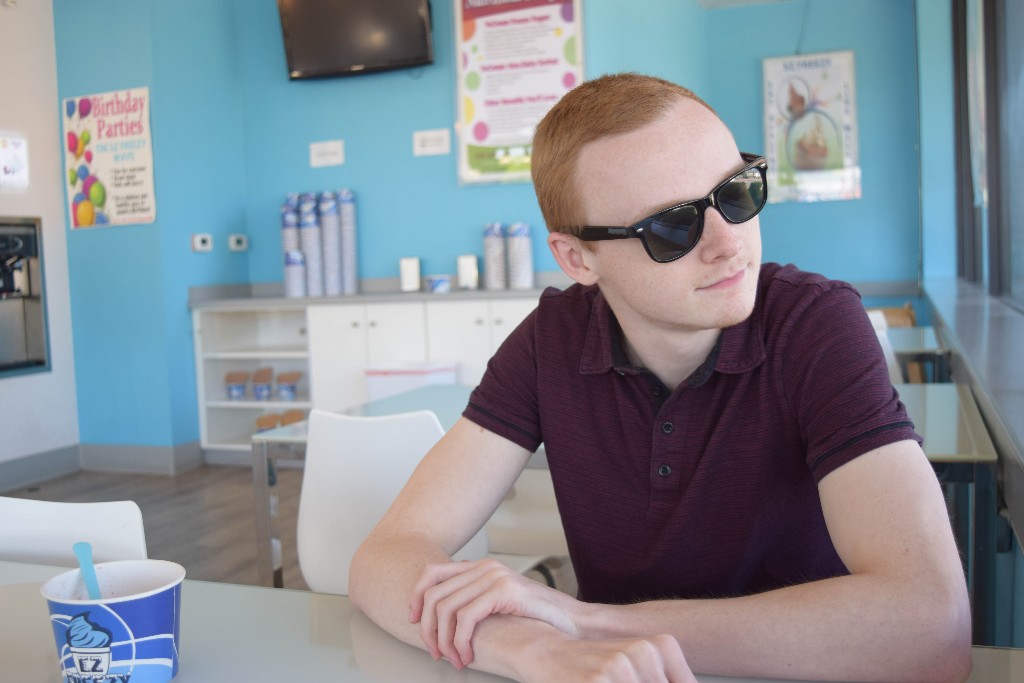 Connor Riggs looks out of EZ Freezy and into his future.

With his eyes focused on his five-year-plan, Connor Riggs, just 19, who will retire from the DMA board after four years of service to our organization.
The David Douglas grad and now PSU student got involved with DMA at a trash pickup, and then, “one thing led to another,” says Connor. A lifelong Midway resident who opts to walk or take TriMet hopes for a time with fewer cars: fortunately, his favorite hangout, the Pizza Baron, is on two bus lines.
Joining the board of directors as well as several committees through the years was a “résumé building experience” that Connor sees as invaluable.
Now a seasoned DMA veteran, he remembers a time, oh, maybe four years ago when he was 16 or so that DMA was “really ragtag.” He credits Executive Director Lori Boisen’s lead and the cadre of volunteers for professionalizing the organization. “We’re here to create and provide opportunities” to the community and district businesses, he says. “It’s a good organization.”
“Connor has contributed to DMA in so many ways, I can’t even begin to count them,” Lori says. “He’s always willing to pitch in physically, he has great ideas, and his wise-beyond-his years perspective has helped shape what DMA is as an organization.”
The prize Connor eyes now is a B.A. in English by next summer, which means a heavy course load plus student teaching. Then, “Travel,” he says, will be his “new M.O.” Teaching abroad is in the mix.
Becoming part of the DMA team, Connor asserts, is a way for young people to grow, learn about their community and gain “meeting endurance.” “In the adult world, there are lots of meetings.”