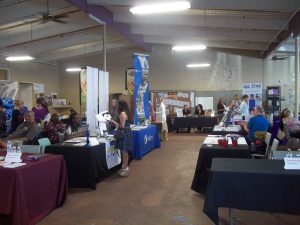 Fifty East Portland residents seeking employment also attended the jobs fair.  Attendees were looking for positions that spanned the range of skill levels.  Some were looking for jobs in the professional fields, and others sought unskilled positions.

Most job seekers left with a bag full of information on how to apply for jobs and appeared pleased with their prospects. One attendee, smiling while chatting with a DMA volunteer greeter, said she found information on janitorial work and was very excited.  Many people might not see janitorial work as a promising opportunity, but this attendee was very excited.  She had potentially found a job that she could do in spite of her disabilities. 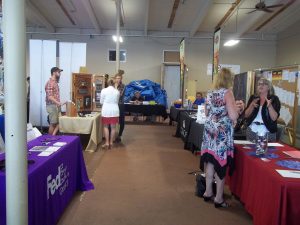 Although organizers expected higher attendance, they were pleased.  If one person finds a job from attending the job fair, the effort is well worth it.  Success is measured in many ways, and often happens without us knowing it.

The NPIs of East Portland have begun planning next year’s jobs fair already.  “We are hoping that next year’s turnout will be much better than this year’s” said Kem Marks, DMA’s AmeriCorps VISTA service member who helped organize the jobs fair. “Maybe next year will be cloudy and not so nice like this year.”